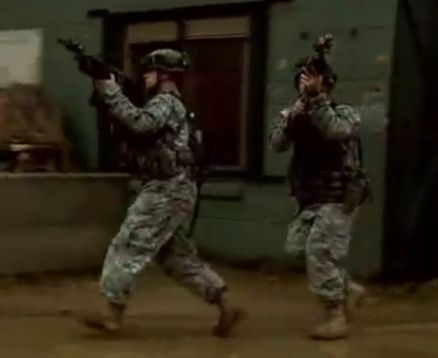 o his fire team, on the attack for the radio jammer, was first to engage with embedded enemy while moving through the woods during OP Signal Lost; destroyed radio jammer and located the HVT

o revived his FTL after he went down and lay down suppressing fire with the SAW; allowed the fire team to regroup with the rest of the Squad

o conducted more than 120 missions in support of OEF with partner forces, ANA/ALP

o as rifleman at COB KIRUMBA, mapped the area of responsibility and improved COB operations and CIMIC activities

o carried his M249 for most of the road march without falling back; set the example for other soldiers to follow

o efficient; placed markings in accordance with platoon and team SOP upon clearing an OBJ during MOUT Live Fire Certification

o demonstrated dedication, perseverance and tenacity in his duties as M249 SAW gunner during JRTC

o mentored peers within the Infantry Rifle Squad and Team

o helped his team, as point man, to finish with the best time in the company for land nav

o demonstrated dedication to duty by volunteering for 5 detainee escort missions, including one high value detainee

o took the initiative to study, learn, repair, and maintain the BDOC crew-served weapons systems, a duty outside his MOS

o although assigned to duties outside his primary MOS, has exceeded all standards and expectations of an Infantry Soldier