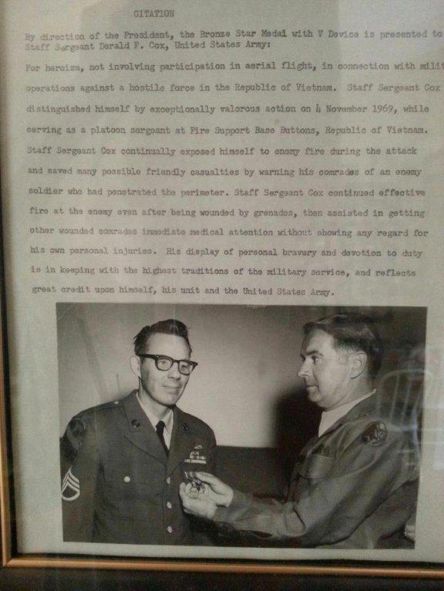 By direction of the President, the Bronze Star Medal with V Device is presented to Staff Sergeant Derald F. Cox, United States Army:

For heroism, not involving participation in aerial flight, in connection with military operations against a hostile force in the Republic of Vietnam. Staff Sergeant Cox distinguished himself by exceptionally valorous action on 4 November 1969, while serving as a platoon sergeant at Fire Support Base Buttons, Republic of Vietnam. Staff Sergeant Cox continually exposed himself to enemy fire during the attack and saved many possible friendly casualties by warning his comrades of an enemy soldier who had penetrated the perimeter. Staff Sergeant Cox continued effective fire at the enemy even after being wounded by grenades, then assisted in getting other wounded comrades immediate medical attention without showing any regard for his own personal injuries. His display of personal bravery and devotion to duty is in keeping with the highest traditions of the military service, and reflects great credit upon himself, his unit and the United States Army.

For heroic achievement on the night of 16 April 1967 while voluntarily serving as a member of a eight-man team from Delta Company, 1st Marine Battalion, 1st Marine Division South Vietnam. When his team, whose mission was the enemy reconnaissance in I Corps area was pursued by a numerically superior enemy force. When pinned down by a barrage of probing automatic weapons fire, Cpl. Haskell received a wound to the right foot. Observing no other wounded Marines Haskell chose the refuse medical evacuation and not sacrifice the Marines position. Leading the patrol away from the path of intense fire, left his position of cover, wrestled the man to the ground and, although wounded himself, managed to assist in ultimately removing the Marines to the safety of the patrol base. Cpl. Haskell halted further enemy attacks by manning a machine gun and establishing fields of fire in a night position which ensured the Marines safety. He further directed helicopters arriving on the scene the next morning as to target areas. By his heroic actions throughout, he was instrumental in saving the life of 8 Marines reflecting great credit upon himself and upholding the highest traditions of the United States Naval Service.