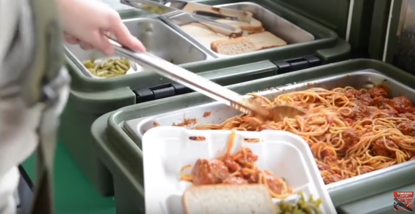 o lead a combined mess section of two companies for 15 days during AT 19 serving over 8,400 meals without incident or injury

o supervised the kitchen for 8 months as Senior Cook

o ran a DFAC as a junior NCO during IDT on a regular basis; ensured that over 300 Soldiers were fed

o set up the containerized kitchen; started serving meals ahead of schedule, provided hot meals in the field

o calculated and distributed the battalion's MREs; all sections and detachments fully supported

o maintained 100% accountability of all assigned equipment valued over $500,000 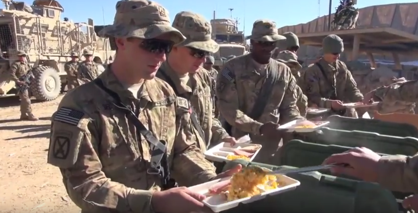 o his resourcefulness helped increase customer satisfaction from 75% to 95%; a true testament of his technical abilities

o supervised all Class I operations during OEF; supported over 400 meals twice daily despite being undermanned

o earned a gold German Schutzenschnur marksmanship badge during OEF; set the standard for his soldiers to emulate as the only food service specialist to do so

o trained six Soldiers in dining facility functions; enabled them to operate and provide sustain mission without degradation to operations

o managed the preparation and distribution of over $1.2 million dollars of Class I subsistence for 5 Combat Outposts during combat operations

o mentored five NCOs in DFAC functions; enabled them to serve up to 1,200 meals daily and operate independently without direct supervision

o volunteered to take on the responsibility of the annual Christmas meal which served over 3,000 soldiers and their families

o served over 22,000 meals during the Operation GOLDEN MEDIC exercise

o maintained accountability for over $30,000 in food inventory and over $5,000 in paper products and equipment with four units sharing a dining facility during annual training (92G20)

o kept dining facility in a clean, safe, and sanitary manner at all times (92G20)

o worked overtime, into the early hours of Thanksgiving Day, to prepare the food for the meal that afternoon, where the DFAC served over 700 soldiers

o cleaned and set up the CK

o devoted herself to the success of the Robert C. Stack Dining Facility; documented training for every aspect of required tasks

o trained rations personnel on accountability and subsistence procedures that decreased the DFAC Account Status by 10%; resulted in 100% readiness for FY 12

o trained two food service Managers in AFMIS accounting operations, which resulted in the facility account status being within tolerance for Fiscal Year 2010

o selected from among peers to serve as First Cook during the Connelly large dining facility competition, he devoted long hours over five days preparing and performing for inspectors. His efforts garnered recognition for best lighting and sanitation seen to date.

o before deployment to FOB Echo, SPC Smith used initiative to stage and inventory all convoy vehicles. Working as a Culinary Specialist, he did an outstanding job of arranging and assisting in preparation of meals for over 250 soliders twice a day during the entire deployment. Despite being under strength, the Food service section met all meal requirements.

o helped organize unscheduled food service for temporary forces; he displayed efficiency, skill, and leadership while mentoring the lower enlisted in practical organization of expedient field kitchen service. His attentional to detail resulted in a safe worksite and his culinary skills also helped to maintain and reinforce the morale and readiness of the deployed force.

o SPC Smith, responsible for feeding over 250 519th MP Battalion Soldiers in a field environment, maintained numerous outside lines and was integral to the orderly and efficient delivery of over 2,000 meals. He displayed a high degree of professionalism, technical expertise, and dedication to duty. Soldier also demonstrated a tireless commitment to excellence and consistently achieved high standards.

o ensured that proper procedures, temperatures, and time periods were adhered to during food preparation

o this soldier is a key member of this dining facility. He is a valuable asset to the army and a credit to his MOS

o instilled a 'team first' mentality within the Section; led by example

o worked with focused determination until the mission was completed

o totally reliable, completed all tasks in a timely and professional manner