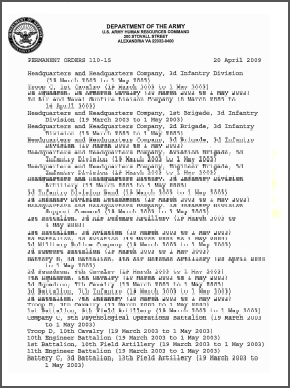 During the period 19 March 2003 to 1 May 2003, Headquarters and Headquarters Company, 3d Infantry Division and its subordinate units distinguished themselves by extraordinary gallantry, valor, professionalism, and esprit de corps in the conduct of unusually complex, difficult, and hazardous combat operations to liberate the country of Iraq. The unit relentlessly attacked over unforgiving terrain, and while facing extremely difficult weather conditions, advanced 750 kilometers as the spearhead in the Coalition's offensive. Continuously opposed by determined Iraqi forces, using both conventional and unconventional tactics and under frequent threat of chemical attack, the Soldiers of the 3d Infantry Division decisively won every engagement of every battle through their unequalled fighting spirit, dedication to duty, and commitment to their cause. Before the fighting ended, the division defeated or destroyed four Republican Guard Divisions, one Iraqi Regular Army Division, three Special Republican Guard Brigades, and thousands of fanatical paramilitary forces. In doing so, the division sustained few casualties and achieved one of the most stunning victories in military history. Aggressively attacking into the heart of Baghdad, the division ultimately removed the brutal Iraqi regime from power and then, despite the constant threat of terrorist attacks, rapidly transitioned to enforce law and order and help rebuild the shattered nation. Its efforts were instrumental in the success of Operation Iraqi Freedom. The courage, skill, and professionalism of the division's Soldiers and its supporting units are in keeping with finest traditions of military service and reflect distinct credit upon the 3d Infantry Division and the United States Army. 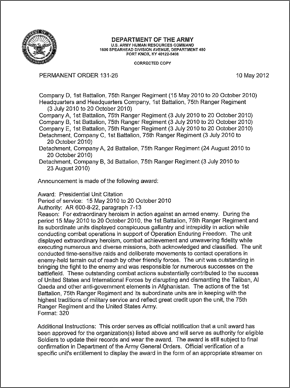 For extraordinary heroism in action against an armed enemy. During the period 15 May 2010 to 20 October 2010, the 1st Battalion, 75th Ranger Regiment and its subordinate units displayed conspicuous gallantry and intrepidity in action while conducting combat operations in support of Operation Enduring Freedom. The unit displayed extraordinary heroism, combat achievement and unwavering fidelity while executing numerous and diverse missions, both acknowledged and classified. The unit conducted time-sensitive raids and deliberate movements to contact operations in enemy-held terrain out of reach by other friendly forces. The unit was outstanding in bringing the fight to the enemy and was responsible for numerous successes on the baltlefield. These outstanding combat actions substantially contributed to the success of United States and International Forces by disrupting and dismantling the Taliban, Al Qaeda and other anti-government elements in Afghanistan. The actions of the 1st Battalion, 75th Ranger Regiment and its subordinate units are in keeping with the highest traditions of military service and reflect great credit upon the unit, the 75th Ranger Regiment and the United States Army.