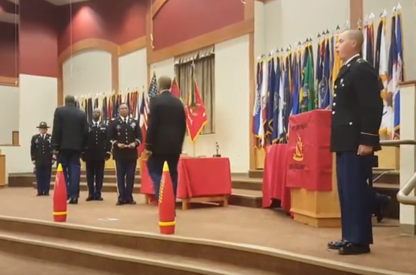 o coached subordinates during a mounted and dismounted M240B and MK19 crew-served weapons range; resulted in 10 qualified teams in the Battery

o stepped up to the plate and shared his marksmanship knowledge and experience; qualified the entire company on the M4

o facilitated the administration of over 1,000 COVID 19 tests; exceeded unit goals and enhanced the health of the community

o made decisions based on the best interest of the 194th XXXX; became one of the most trusted leaders in the Brigade

o recognized by the 1SG for her professionalism during the Live Fire exercise; led to enrollment in the Vehicle Crew Evaluator Course

o earned a reputation for reliability and competence; built a level of trust among Soldiers of each unit that fell under 25TH CAB for repairs and services

o performed all tasks to the fullest, accomplishing all tasks with superior results; extremely competent NCO

o demonstrated the ability to make sound decisions in the absence of the Platoon Sergeant; assign more responsibility

o showed a strong drive and concern for the health and welfare of all Soldiers; forged a team dedicated to readiness

o modified NSN repair parts to work on TPE Gators and Polaris when civilian parts were unavailable; prevented conditions from limiting the mission

o achieved 100% of assigned recruiting mission during FY 18 in only 9 months; currently holds a 136% mission rating

o planned and supported transportation operations within the NCR; readily supported over 30,000 customers over a variety of circumstances

o orchestrated the preparation and movement of over $10,000,000 in equipment to a forward deployed location; key to mission sustainment

o shared his extensive gunnery knowledge and skill with his crew; crew achieved a qualification rating in their first HMMWV gunnery

o achieved 100% of his assigned recruiting mission during FY19; currently at 100% mission for FY20

o exemplified the team first mentality, going above and beyond to coach, mentor and work with team members on his own time to increase knowledge and share best practices in all areas of maintenance

o instrumental in revising the battle rhythm throughout the battalion; resulting in improved performance across all measured areas

o managed the regiment's TMDE program flawlessly; maintained an availability rate of 99.5% and a delinquency rate of 0%

o coordinated, planned, and executed 4 ceremonies for a one star general

o coordinated, planned, and executed artillery missions for a one star general in three ceremonies; one on a two weeks notice

o coordinated, planned, executed and instructed the BN CLS course for HHC and tactical company deploying to a combat zone

o essential during pre-mob training for platoons preparing for deployment

o accomplished 130 of 145 qualification tasks; 75% completed on two airframes; ahead of peers

o achieved an outstanding rating on 3 out of 4 command inspections, best in the battalion

o provided daily logistics support to two maneuver task forces simultaneously, over 1,000 Soldiers across three provinces, the only FSC in the brigade capable of this mission

o served as the Supply Sergeant for six months in the Supply NCO's absence; focused research and planning ensured there was no degradation to the mission

o developed a plan to turn in over $60,000 of serviceable CLIX service and repair parts to the SSA; created a more efficient and clean parts bin

o used all available resources to accomplish the mission; coordinated with outside units to obtain support for personnel; eliminated admin delays

o failed to complete multiple CBRN tasks issued by the battery commander; counseled numerous times to complete his duties within the suspense provided

o was consistently late on all training milestones; 30 days behind on SSD-2; threatens Section readiness

o turned down opportunities for new experience and professional growth; not progressing or advancing in responsibility

o cannot be depended on and is frequently late for shift; recommended for reclassification

o reported to work under the influence of alcohol; unable to execute his duties and breached safety protocols

o failed to understand the importance of his duties, took advantage of every opportunity to avoid responsibility

o accomplished all tasks to the minimum standard