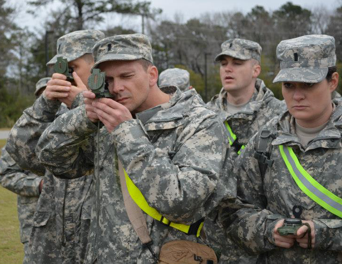 o his "Take Charge" attitude developed a sense of teamwork, loyalty, and initiative in his subordinates

o mentored two senior NCOs on the importance of volunteering; NCOs were recognized by the local USO and one received the Army Outstanding Volunteer Service Medal

o mentored two Soldiers until they established proficiency; both excelled at the promotion board and achieved their promotable status

o prepard NCOs and Soldiers for promotion and competitive boards; resulted in two promotions to Staff Sergeant and two monthly board winners

o strengthened weaknesses within the squad through growth and developmental counseling

o spent 20 extra hours training and assisting four others to train for the JMPI exam in jumpmaster school; all graduated

o completed 16 semester hours with a 3.7 GPA towards a Degree in Environmental Science at American Military University

o conducted many classroom and practical exercises over a wide range of focuses, using creative techniques to maintain team-centric and productive learning environments

o volunteered to prepare for and participate in the Soldier of the month board; produced effective leaders

o proactive; constantly guided his subordinates towards team accomplishment on time and with great accuracy for the CMT/CST

o mentored new Soldiers until they established themselves in the work center; facilitated shop harmony and efficiency

o invested time and effort to establish relationships with Soldiers; established or followed-up on career and personal goals; dramatic improvement in morale

o groomed team for success; consistently counseled and spot corrected soldiers on deficiencies and trends in order to direct them in the right path

o made effort to welcome new arrivals and integrate them into daily operations; key factor in section's readiness

o motivated Soldiers to excel during company APFT with an average score over 290; fostered teamwork and esprit de corp within his team

o established a Fusion Sergeant's Time Training for soldiers of all ranks; honed technical skills and developed and improved weak analytical skills on his team

o involved in the career decisions of Soldiers, gave them the knowledge necessary to make informed, intelligent choices

o trained two Rangers within his Section on EIB task; both earned their EIB with first time go's on all events

o committed to seeing his section succeed in all missions by providing purpose, direction, and motivation to Soldiers

o held all Soldiers equally accountable for their actions and standards

o inspired soldiers to perform beyond their expectations

o advocated for an anti-discrimination work environment that paid big dividends in morale, loyalty, and productivity

o natural leader; brought a group of individuals together and molded them into a cohesive and motivated team

o trained and mentored eight mortar crewmen on the 81mm and the 120mm mortar system; all earned expert gunner on the mortar gunners exam and safety exam

o led by example and encouraged equal treatment and opportunity for all Soldiers; improved morale and increased understanding of and support for SHARP policies

Needs Improvement/ Did Not Meet Standard

o was often unaware of the whereabouts of Soldiers

o failed to establish procedures for securing and accounting for ammunition