1SG Torres' potential as a Senior NCO is immeasurable and is in the top 10% of First Sergeants that I have rated in a 20 year career. He has the work ethic, contagious energy, and passion to serve our Troopers, Families, and the Army at the highest levels. A future CSM; Promote below the zone and send to the USASMA Course immediately.

SFC Ledoux continues to demonstrate exceptional potential as an NCO and leader. Select for senior leadership schools as soon as possible and assign to positions of greater responsibility ahead of peers. SFC Ledoux displays potential daily as a future 1SG through his actions and dedication to the mission.

Performs at expected levels. Send to Senior Leaders course when slots are available. Promote to SFC with peers.

SSG Davis is a hard working Soldier who performs all duties in a conscientious manner and learns from shortfalls. He consistently participates in all tasks and his willingness to accept added responsibility shows true dedication to the Commanders intent, Unit mission, and Army plan.

SSG ******'s potential to excel in positions of greater responsibility is higher than most. His dedication to the organization and willingness to step in and take on additional training requirements are duly noted. Challenging this Soldier to use his vast knowledge will make him thrive as an NCO. SSG ****** should be promoted at the first opportunity.

SFC XXXXX potential rates in the top 10% of senior NCOs that I have senior rated in my military career. She/He displays unlimited potential; select for key positions in the AMEDD. Must promote now and send to Master Leader Course immediately.

SGT XXXXX ranks #4 of 16 SGT's I currently senior rate. He consistently demonstrates the leadership and potential to serve as a Staff Sergeant. Continue to develop and place him in assignments with the most increased responsibility; he will far exceed the standards. He will succeed as a BSB ELM Shop NCOIC. Send him to the Advanced Leadership Course immediately.

SSG XXXXXX is in the top 20% of NCOs who I've worked with in my 17 years of service. He has unlimited potential. Send to SLC now and promote to Sergeant First Class ahead of peers. He is ready to serve as a Platoon Sergeant.

SFC B is my number 1 readiness NCO within the Battalion. He possesses the skills to serve at the highest levels in any of the toughest assignments. His experience and proficiency places him above his peers. He is a professional that others strive to emulate. He is a highly effective leader who made a long-lasting impact to Annual Training and Battalion Range 2017.

SFC Rambo is my number 1 Platoon Sergeant. He possesses the skills to serve at the highest levels in any of the toughest assignments. His experience and proficiency places him above his peers. He is a professional that others strive to emulate. Promote him to Master Sergeant now and assign him as a Company First Sergeant. Truly unlimited potential.

Staff Sergeant Coronado is ready for immediate promotion to Sergeant First Class. He developed the deployment maintenance SOP and brought delinquencies to zero balance and returned $20,000 to the 25th TC. He has the maturity and technical knowledge needed to be an outstanding Warrant Officer.

SGT Gale's take charge attitude and "can do" optimism paired with his natural ability made him my first choice for section supervisor. He has unlimited potential for future leadership positions with increased authority and responsibility. He has my highest recommendation for advancement.

Sergeant First Class Valdez led his battery to success. He trained all his Soldiers on the Sentinel RADAR and the FAAD computer system, exceeding requirements. He aggressively met and overcame obstacles and streamlined operations. He is overdue for greater responsibility. Promote to MSG now!

SGT Mansk is a capable Health Care Specialist with a can-do attitude. He amplified local medical assets by assisting with the care of 100 trauma and 200 outpatient local nationals and coalition forces. He provided top care during 11 mass casualties, 60 hours of medical-surgical care and ICU recovery. His attention to detail ensured continuity of effective care as he assisted with the medevac of 60 patients to role III care. SGT Mansk is always willing to accept more challenging tasks. Promote to Staff Sergeant as soon as possible.

She is my go-to manager for logistics planning and an outstanding Platoon Sergeant with exceptional experience. Challenge with greater responsibilities and promote to First Class now.

Staff Sergeant Lawlor is an expert Transportation Manager. He developed a Combat Heavy Maintenance Program that became the standard for all others units in the AOR. He has met and conquered all challenges and is ready to excel in any billet assigned. A clear choice for Sergeant First Class, promote immediately.

Staff Sergeant Vasquez's sustained superior performance is widely recognized. He provided detailed and critical input to the Computer Network Operations Execution Order that was adopted by Army G3. He has unlimited potential and is a must select for Sergeant First Class.

SGT McElhany is a dynamic Soldier and multi-talented mechanic. His efforts can be measured in a 50% reduction in our maintenance backlog for subordinate activities. He has a positive attitude and readily accepts increased responsibilities. Promote!

Sergeant Irrizarry is a highly effective leader and a proficient technician who made a lasting contribution to the 416th Theater Engineer Command. He was chosen to assist the G-8 Quality assurance team in conducting USARC mandated Quality Assurance Reviews at two separate units and trained the unit pay personnel in the proper USARC required pay procedures. He also assisted in the 327th EN BDE OIP reinspection. His hard work was an important part in their success. He is highly recommended for advancement to Sergeant First Class.

Sergeant Liggins worked behind the scenes without expectation of recognition to ensure compliance with requirements. He processed equipment for 3-2 Stryker Brigade Combat Team's RESET of its Thermal Sights, Commercial Off The Shelf Radios and GPS systems. Promote now.

Sergeant Hunsberger is an enthusiastic and versatile Soldier. He worked hard to ensure he was quickly task-qualified and a contributing member of our team. Challenge with greater responsibilities.

Master Sergeant Auble exemplifies our core values and brings the best out of those around him. He possesses all the capabilities of an outstanding Command Sergeant Major. He has my strongest personal recommendation for Sergeant Major.

She is an undeniably confident, capable and agile manager. Challenge this exceptional leader with positions of greater responsibility.

Performs at expected levels. Send to Senior Leaders course when slots are available. Promote to SFC with peers.

SFC XXXXXX demonstrates potential to continue serving at his current level of responsibility. His potential for service in positions of higher rank is limited. Send to Master Leader Course when available. Promote with peers.

SSG Bila demonstrates potential to serve in positions of higher rank with additional mentorship and guidance. Send to Advanced Leader Course when available. Promote to Sergeant First Class with peers.

Based on limited potential to serve in positions of similar or higher responsibility, do not promote this NCO.

SSG XXXXX is currently 12th out of 12 Staff Sergeants that I rate. He has potential if he desires to use it. Currently the United States Army is not his priority. With further mentorship and training he may be ready for greater responsibilities in the future. Soldier should not be sent to advanced schooling or promoted at this time.

SGT Smith is an unconventional asset to the Unit as an assistant to the Unit Supply Sergeant. Send Soldier to current level NCOES, promote with peers.

Her potential is limited, she performs at expected levels. With further mentorship and training she may be ready for greater responsibilities in the future. Send to the Advanced Leaders Course when available. Promote to Staff Sergeant with peers.

SFC Brown has unlimited potential but needs to work on his leadership and problem solving skills before executing duties of greater responsibility. Send to SLC as soon as Soldier is eligible.

Performance is often above average but SSG Wheelis lacks loyalty and respect for superiors. She has potential, with more experience, to excel as a leader.

He is a technical SME and training asset but demonstrates a lack of rapport with and concern for subordinates and has contributed to low morale in this Unit. May perform better in another Command.

Do not recommend for promotion at this time. With further mentorship and training SGT Maclay may be ready for greater responsibilities in the future.

SSG Harding's performance is sometimes above average but he is undependable and cannot be relied on for unsupervised assignments.

This NCO is not a contributing member of the U.S. Army; do not retain and remove from positions of responsiblity immediately.

SSG Adams' otherwise superior performance was marred by his lapse in judgement during rating period; failed to uphold the Army Values.

SGT Willard is ready for promotion. With detailed instruction and supervision this Soldier can accomplish assigned tasks.

SGT Keck consistently failed to comply with safety regulations and OIs and is a threat to the safety of this battery. Recommend discharge at earliest opportunity.

SSG Smith is uncooperative with leadership and fails to understand the difference between "taking care of troops" and following orders. His combative attitude is counter-productive and a liability to this Command.

Despite increased assistance and training, he continues to have difficulty completing assigned tasks. Recommend reclassification.

SGT Reynolds is unable to adjust to deployment or the diverse demands of a joint environment.

Performs at expected levels, does not distinguish himself from his peers. Send to Advance Leaders Course when slot is available. 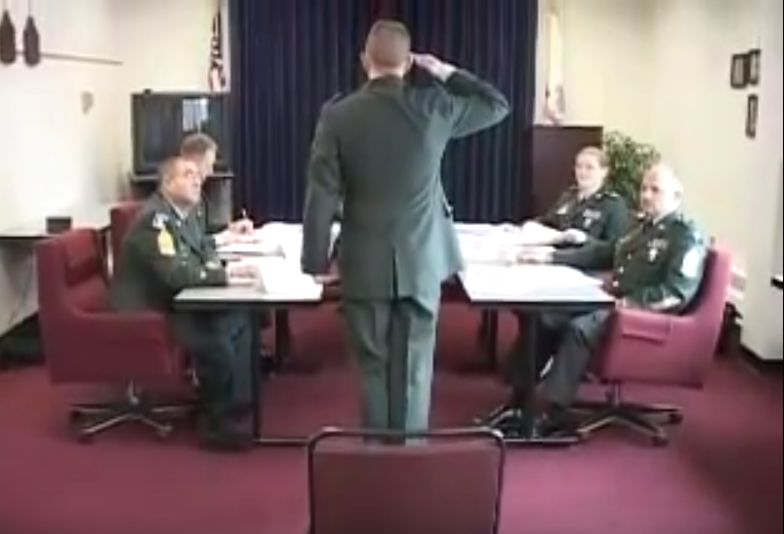