o facilitated an enhanced situational awareness of airspace issues for the Brigade Commander and his staff, allowing them to focus command and control on the battlefield

o notified Command Team of CCIRs and NIPR blackouts, reporting failures within minutes of occurrence and reducing restoral times by 50%

o guaranteed the success of the Brigade Tactical Operations Center 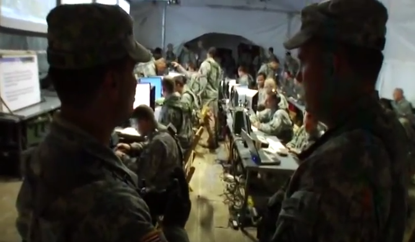 o as Operations NCO, worked around the clock tracking all of 1175th Trans HET convoys from Kuwait to Iraq and back

o provided mature leadership as the BN OPS NCOIC, while remaining flexible and mission-focused during the rapidly evolving requirements of a forward deployed Transportation Battalion

o initiated and supervised the consolidation, removal and retrograde of over 200 containers from within RC-Capital, Afghanistan, saving the U.S. government millions of dollars

o surmounted all obstacles; accepts nothing less than total success

o as Ops NCO, he ensured all company M40 pro masks were inspected and ensured their serviceability prior to the COMET inspection

o as MCP and CF-J NCOIC, he provided assistance to the Battle Majors ensuring fluid operation within and between two CPs

o volunteered free time to create 13 PFC podcasts; accessed and used by 696 students per year on the SOCM LMS portal

o led an overseas deployment of seven cadre to train the pilot course of NATO SOCM; became the unit SME for foreign travel

o hosted 12 general officer and distinguished guest visitor tours of XXXX; served as an ambassador for the organization

o implemented an agressive study plan while at the Advanced Leadership Course; resulted in a 97% grade point average and selection to the Commadant's List

o managed the life cycle replacement of IT systems and successfully recycled over $80,000 of antiquated computer systems at DRMO

o coordinated the transfer and fielding of 140 equipment items valued at over $2 million; actions directly affected the Command's readiness

o devoted mentor and trainer that assumed night time operations of TOC, allowing his subordinates to receive a 100% success rate on METL tasks during annual training

o due to certifications, assumed additional duties as the Equal Opportunity Leader and SHARP for battalion during unit's reorganization after mobilization

o estimated requirements and arranged food and water pick up and drops for over 10,0000 Soldiers across 20 kilometers daily

o served as container manager for Camp Striker and FOB Cropper, diligently planning for all contingencies

o coordinated with 5 different units for MILCON-related issues and support, meeting all needs

o tracked and scheduled over 1,000 hours of technical training for 77 Soldiers and Airmen