How to Write an NCOER 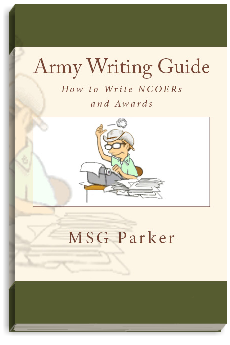 What is an NCOER?

An NCOER (DA Form 2166-8) is a form used to document a person's performance for a specific length of time --usually a year. Everyone in the Army has their performance rated and recorded this way and, if you're a supervisor, you'll be responsible for writing NCOERs for the people you report on. The supervisor is responsible for writing the NCOER but it's common for the supervisor to ask the Soldier being rated for material. Some people might call this writing their own NCOER but it's not. Supervisors who care about their troops want to write the best NCOER possible and may ask the subordinate for information to make sure they didn't miss any notable achievements. It's in the soldier's best interest to provide as much information as possible.

The first step in writing a good NCOER is to THINK POSITIVE. We all go through our ups and downs. Sometimes we get discouraged and think, “I won’t be promoted” so why bother? Don’t fall into this trap! You can be promoted! I don't mean to belittle our NCO Corps but I have seen people who could barely speak English or lace their shoes get promoted –again and again! So I know you can be!

And don’t be intimidated by the perceived increase in responsibility. By this I mean, don't sabotage your chances of promotion because you don't think you can handle the next rank. This is not an issue for some people but for others, it is. It might be hard to picture yourself performing your supervisor’s duties. It may seem as if your supervisor smoothly carries out his or her responsibilities but that it might be too much for you to handle. And that’s natural because we’re all different and we all approach tasks in a different way. The way you execute the duties of your next rank will be different than your predecessor and may even be more efficient. So don't let this natural concern damper your enthusiasm. Every NCO encounters a moment of self-doubt and you have to overcome it.

The first real writing done in the NCOER is the duty description. The duty description must describe your most important duties or the NCOER will lack impact from the very start. This block is the only place where we’re allowed to list our responsibilities and what we do on the job. Accomplishments will be listed later in the body of the NCOER. Fit in as much as you can beginning with the most important information. If you supervise troops or perform any supervisory oversight, list those duties first. See the NCOER Duty Description Page for more information.

The main section of the NCOER form is for listing your achievements during the reporting period. The purpose of listing achievements is to have an official record of your performance so that later, you can be compared with your peers and rated for promotion. The goal of the NCOER is to accurately and fully describe a Soldier’s performance during the reporting period. So it's important first, to have an impressive list of accomplishments and second, to write them in a way that ensures their importance is recognized. Note that bullet comments are required no matter what rating is received.

It's important to realize that it’s not the words or glowing phrases that get you promoted –it’s the rating that your supervisor gives you. And that depends heavily on your performance during the year. When the NCOER is due, you can't change the past year's performance but you can turn whatever performance you do have into the best NCOER possible. And it is possible to write an NCOER in such a way that it will be difficult for your supervisor to grade your performance as anything less than excellent. All it takes is a little time and effort.

List your achievements during the reporting period. The most effective way to come up with material for your NCOER is to brainstorm first. List all the ratee's accomplishments on a separate sheet of paper. Write down everything that might qualify as a bullet. Nothing is too small or off-limits. Deployments, additional duties, training, education, volunteer work, community involvement, awards and decorations, etc. List it all!

Now is no time to be modest! One of the most common hurdles for first-time NCOER writers is modesty. Most of us don't want to appear as if we're bragging about our performance and that's good. But when it comes to NCOERs, your goal is to make it sound as if you're the best Soldier ever! In Army evaluations, we always write to make it sound as if we invented the alphabet or developed the internet! We always exaggerate somewhat. That's just the way it's done and you have to get in that mode! When you get used to it, it can actually be kind of fun.

Claim everything! If you're new to NCOERs, you might be reluctant to claim credit for any achievements that you weren't 100% responsible for. Don't be! Most section accomplishments require the efforts of many people and are the product of teamwork. If you had any part in an achievement, you are allowed to claim it and list it as one of your bullets. A supervisor will often reuse the same accomplishments, over and over, in several different NCOERs so it's not unexpected or unprecedented. As a rule of thumb, if you had any part in an achievement, from actually turning a wrench to being on the team that did it, you can claim it. So claim everything and let your supervisor sort it out. And don't worry that your supervisor will scrutinize your inputs and dispute your claims. It doesn't happen. A supervisor is much more concerned with getting enough decent material for your evaluation report than with analyzing which person contributed the most to this or that project.

After you've brainstormed and came up with a list of accomplishments, sort them into the categories required by the NCOER form:

Don't be surprised if your list of accomplishments doesn't fit neatly into these categories. You'll probably have to reverse-engineer your bullets to fit them into these topics or look for more achievements that fit the required box. For example, if you're not a supervisor, you may not have any obvious feats of leadership. You'll have to think outside the box and find something that qualifies as a leadership bullet. See this list of NCOER bullet comments for examples.

Don't have enough accomplishments? You can bend the rules a little by signing up for accomplishments at the last minute as long as it's done before the end of the rating period. Normally, the unit requires the NCOER to be completed before the reporting period is over so it's usually possible. Enroll in a college class (Your bullet will have to say, "enrolled in.." rather than "completed so and so credit hours" but it's better than nothing.), sign up for Habitat for Humanity, volunteer for the next change of command ceremony, etc. Don't let the opportunity to excel slip away.

After you've brainstormed and come up with a suitable list of accomplishments and sorted them into the required categories, it’s time to reword those bullet comments until they're as descriptive as possible. A lot of emphasis is put on writing bullet comments that fit the rating. We’ll discuss how that's done after we outline the method to make your bullets as effective as possible.

(1) be short, concise, to the point. Bullets will not be longer than two lines, preferably one; and no more than one bullet to a line.

(2) Start with action words (verbs) or possessive pronouns (his or her); Personal pronouns he or she may be used; should use ‘past’ tense when addressing NCO’s performance and/or contributions.

(3) Be double-spaced between bullets.

(4) Be preceded by a small letter ‘o’ to designate the start of the comment. Each bullet comment must start with a small letter unless it’s a proper noun that is usually capitalized.

(5) A specific example can be used only once; therefore, the rater must decide under which responsibility the bullet fits best (or is most applicable)."

As stated above, bullet comments may begin with a verb or a possessive pronoun (his or her). But in general, most of the time a strong, direct bullet should start with a verb. Only use a pronoun when it’s necessary such as when describing personal characteristics.