o he was key factor in successful stand up of 1st Platoon's water purification station; freed unit from dependence on NATO unit

o key to Company's successful move; maintained equipment at a high state of readiness during the move from Sea Girt to Fort Dix

o made critical on-the-spot repairs to the TWPS which enabled distribution of 70,000 gallons of water to 5,000 soldiers

o demonstrated and instructed soldiers on radio practices, procedures and etiquette contributing to the improvement of the unit

o executed the duties of ADVON, completed all tasks and provided necessary equipment for a seamless transition between the unit in Winterville and CSTX at Fort Dix 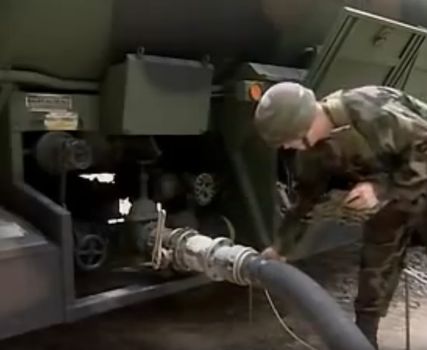 o erected the 800K FSSP for Erbil, Iraq FOB; experience with the FSSP was instrumental to the unit's success

o ensured water buffalos, light sets, and generators were full and running at all times; indispensable to the 87th Troop command FTX and CPX success

o accounted for and issued more than 1,500,000 Gal of JP8 to support the 244th, Combat Aviation Brigade's mission during OIR

o served as the company's environmental officer, ensured everyone complied with standards

o distributed over 100,000 gallons of F-24 fuel to support international operations over Somalia

o assumed responsibility for Pump Station #3 during AT and pumped over 1,500,000 gallons

o delivered 50,000 gallons of purified water during a rotation to Pohakuloa Training Area

o participated in multiple convoy missions and transferred over 3,000 gallons of bulk fuel to the FSC

o was instrumental in the movement and distribution of more than 6,000,000 gallons of JP8 to eight separate locations in the austere conditions of combat

o assisted in the designing and planning of the expansion of FOB Salerno theater FARP and AHA; improved aircraft versatility and ammuntion storage capacity by 20%

o trained and rehearsed all Soldiers to be reactive and proactive in FARP and AHA safety procedures; resulting in flawless execution of all tasks

o instilled the desire to put forth the maximum effort in missions and duties; motivated his NCOs to take on tough missions and suceed

o directly responsible for ensuring his FARPs were in compliance with all OSHA, HAZMAT and safety regulations; highly praised during two safety inspections

o exceeded 10,000 gallons of F24 fuel; ensured the success of all refueling operations

o recovered 5,000 gallons of JP-8 that was unaccounted for in logs

o mastered the Army's most diverse hydrant system, routing 90K gallons of fuel to ten aircraft at 5 stations and enabling delivery of 20 tons of cargo