PFC St Germain personally vaccinated over 700 service members and civilians in support of the COVID 19 vaccination mission and helped the vaccine team reach its goal of completing over 3500 vaccinations in less than 30 days. She demonstrated dedication to her profession as a health care professional with patience and compassion which reduced vaccine fear and hesitation in her patients. Her support of the mission was a vital factor in the CTARNG achieving its goal of vaccinating everyone who requested to be vaccinated.

Meritorious service while serving as Instructor and Course Developer, HHC, 232d Medical Battalion, 32d Medical Brigade, Joint Base San Antonio from XXXXXXXX to XXXXXXXX. Staff Sergeant Coranado was instrumental in developing and implementing the use of online learning platforms in the 68W Combat Medic specialist course in response to changing conditions during the COVID-19 pandemic. These platforms include the use of Blackboard, multiple practice tests and study guides, and approximately 400 hours of didactic and psychomotor skills videos. As a result, the Army was able to continue training and graduated more than 3,000 new Combat Medic Specialists to add to the operational force. The sterling accomplishments of Sergeant Coranado reflect great credit upon himself, the 32d Medical Brigade and the United States Army.

SGT XXXX displayed exceptional leadership skills and medical proficiency as a senior treatment NCO for the Role I from 20170628 to 20180501. His attention to detail and willingness to succeed contributed to the successful reception, treatment, and evacuation of 30 real-world and over 500 notional casualties. SGT xxxx assisted his team in executing updated FAS/MAS operations to achieve mission objectives. SGT Larue's commitment as a healthcare sergeant resulted in zero critical injuries or deaths of Soldiers in his care.

SPC XXXXX distinguished himself from his peers by exceptional service as an Emergency Room Medic from November 2015 to January 2017. His skill, competence and medical knowledge played a vital role in providing care to a daily patient census of over 170 patients in the Emergency Department. He played an integral part of the Ambulance Team, responding to and transferring over 100 personnel to hospitals providing outstanding en route medical care saving the Army over $150,000.00 in ambulance transport fees.

SPC XXXXXX expanded his knowledge by being competent in assisting our providers in emergency procedures and successfully trained over 100 Air Force and 25th ID Soldiers, allowing them to receive training certifications. He responded to over 300 Rapid Response Team and Code Blue calls during his tenure. SPC XXXX filled a critical position during two RIMPAC's, he was responsible for triaging critical patients ensuring the highest quality of care and was a vital part of the decontamination team treating over 70 simulated patients.

SPC XXXXXX was selected to serve as the enlisted aide to the Command Sergeant Major of Regional Health Command-Pacific. He created and implemented a driver's checklist for driving VIP's which was included in the TAMC Gate Gaurd brief. SPC Henderson tracked required training and was the Combined Federal Campaign manager for RHC-P Headquarters staff. SPC XXXXXX was recognized multiple times for his attention to detail and professionalism when assisting the leadership of the U.S. Army during their visits to RHC-P.

SPC Brooks demonstrated a pattern of outstanding performance during the time frame listed by always volunteering for tasks with the utmost enthusiasm. He was instrumental to the completion of the medical section s missions such as height and weight recording, exemplary medical coverage at APFTs, live fire ranges, and land navigation exercises. His dedication as a team leader was crucial to the medical readiness of his Soldiers.

PROFESSIONAL ACHIEVEMENT IN THE SUPERIOR PERFORMANCE OF HIS DUTIES WHILE ASSIGNED AS A CADRE DEVELOPMENT TRAINING INSTRUCTOR, DEPARTMENT OF COMBAT MEDIC TRAINING, MEDICAL EDUCATION AND TRAINING CAMPUS FROM JUNE 2012 TO JUNE 2013. SGT LIMA SKILLFULLY AND METHODICALLY COORDINATED THE EXECUTION OF THE 68W10 HEALTH SPECIALIST PROGRAM. HIS HARD WORK AND VAST EXPERIENCE PLAYED A SIGNIFICANT ROLE IN ENSURING THAT THE COURSE MATERIAL WAS PRESENTED IN A PROFESSIONAL AND EFFICIENT MANNER. HE DEMONSTRATED AMAZING INITIATIVE AND MOTIVIATION THROUGHOUT ALL PHASES OF THE COURSE. HIS CONTRIBUTIONS RESULTED IN THE CONTINUING EDUCATION AND RECERTIFICATION OF ALL DEPARTMENT OF COMBAT MEDIC TRAINING, EMERGENCY MEDICAL TECHNICIAN PARAMEDICS AND BASICS. SGT LIMA'S PROFESSIONAL ABILITY, PERSONAL INITIATIVE, AND DEVOTION TO DUTY REFLECTED CREDIT UPON HIMSELF AND WERE IN KEEPING WITH THE HIGHEST TRADITIONS OF THE DEPARTMENT OF COMBAT MEDIC TRAINING, THE UNITED STATES ARMY MEDICAL DEPARTMENT CENTER AND SCHOOL, AND THE MEDICAL EDUCATION AND TRAINING CAMPUS.

SGT Smith provided exceptional service as a 68W Healthcare Specialist on a 16 bed inpatient Mother Baby Unit in a 198 bed Army Medical Center from September 2013 until September 2016. She delivered outstanding direct patient care to hundreds of Soldiers and beneficiaries during her time on 5B2. During her tenure she functioned as the unit Equipment Management NCO and the Point of Care Testing Representative, ensuring medical equipment was functional and readily available for patient care.

SGT XXXX served for over two years in the Emergency Department of a level III Regional Army Medical Center that serves the Pacific Region; treats Soldiers, their families, beneficiaries, and retirees and treats approximately 140 patients per day. His service positively impacted the lives of over 24k individual patients during his tenure. SGT Hairston responded to over 80 RRT calls and was the go to medic for difficult IV access.

SPC Rodriguez demonstrated a pattern of outstanding performance during the preparation, execution and recovery of 110TH CM BN (TE) National Training Center (NTC) rotation 14-08. She displayed a high level of competence and professionalism while serving as the team leader in the Battalion Aid Station. As team leader, she was responsible for the welfare, accountability, and mission readiness of two Soldiers, their safety and the serviceability of their weapons and all assigned equipment valued over 185,000 thousand dollars.

SPC Rodriguez' tireless work ethic, knowledge and interaction of supplies ensured preparation for real world and simulated casualties. Her guidance and attention to detail contributed greatly to the overall success of each mission that followed and fostered an environment of mission and equipment readiness. SPC Rodriguez' exemplary handling of administrative matters attests to her professional knowledge, willingness to accept responsibility, attention to detail, and the ability to adapt herself to any assignment or situation.

SPC Rodriguez' dedication and professionalism as a medic built an unwavering level of trust among the Soldiers of each unit that fell under 110TH CM BN (TE) for patient care. Her knowledge of tactics, techniques, and procedures contributed to the success of the battalion's mission as she was able to keep an Aid Station running 12 hours per day while in RUBA, maintain constant cognizance of her surroundings and act accordingly while urging her Soldiers to succeed in continuing mission with minimal manpower loss.

Upon return from NTC, SPC Rodriguez was chosen over three other medics to take control of recovery as the Non Commissioned Officer In Charge. She simultaneously led the team through NTC recovery and Change of Command Inspections while integrating her new medic. SPC Rodriguez' leadership and "Take Charge" attitude inspired her team to rise above themselves and accomplish all missions though they had limited staff. 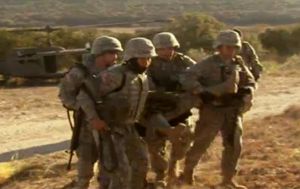 As a vital member of the Forward Surgical Team, he amplified local medical assets by assisting with the care of 100 trauma and 200 outpatient local nationals and coalition forces.

His attention to detail provided continuity of care as she assisted with the medevac of over 200 patients to role III care.

Facilitated the prescreening of 325 military members during several successful blood drives, two of which occured during indirect fire. His dedication to duty increased the emergency supply of blood and optimized patient care readiness.

SSG Foley repeatedly volunteered for and served as range cadre, assisting 399th A Co. Soldiers in zeroing and qualifying with the M16A2 weapons system. His tight integration with the team streamlined training and reduced range time by 50%.

SSG Foley assisted with unit inventory before turning equipment over to Ft. Dix. His accurate and minute accounting coupled with realistic assessment of equipment condition resulted in a positive balance in the company budget.

As ADVON personnel, he prepared the site and set up required equipment for training. His participation has made him an indispensable member of the team and faciliated mission readiness.

Trained over 100 inexperienced Navy personnel on the setting up and taking down of the TEMPER tent system and hospital operations and EMT section procedures. Increased joint ops readiness.

o exceptional NCO; voted the Instructor of the Cycle over 60 NCOs for class 5-10

o selected to fill the role of SMTS NCOIC on multiple occasions without compromising the mission, the caliber of training and the safety for students and cadre

o selflessly volunteered to participate in multiple outreach functions for the SAMC that helped over 2,000 Soldiers and civilians in the local community

o superbly trained over 5,000 Soldiers on BAS, MOUT, patrol, convoy, and FOB operations that will increase their expertise and survivability during combat operations

o his strong emphasis on professional growth encouraged 100% of his NCOs to enroll in college courses; over 30 college credits were completed

o effectively maintained 100% accountability of over $10,000 supplies and assisted with $1,000,000 in supplies and equipment without damage or lost

o while in the WTU, seved as a first responder, helped insure that the best medical treatment possible was being receved including IV's proper o2 levels and medical transfer was properly recorded for transfering to further care.

Sergeant M served and completed two tours of duty in Iraq, as a Health Care Specialist

Segeant M deployed to Iraq for a second time in 2011 and served as a team leader and emergency care NCO for a medical company providing comprehensive level II medical care in support of worldwide contingency opeations.

Sergeant M was responsible for the management, health, welfare, morale, and accountability of seven Soldiers in all aspects of medical proficiency and training.

Sergeant M supervised field and clinical medical facilities under the supervision of a Physician.

Sergeant M was responsible for the accountability and management of more then $200,000.00 of equipment sets and vehicles.

As an Ambulance Driver/Aid Man, demonstrated proficiency and knowledge of his job well above his peers

Despite fatigue and lack of assets, remained highly motivated thoughout the entire operation

Progressed from duties as squad leader, to Senior NCO over numerous projects, to responsibilities as aide/advisor to the Commander and CSM

Supported urgent medical care for approximately 2,500 service members and their families in the Fort Stewart community

MSG Auble's performance as the Medical Plans OIC, in the absence of the assigned officer, exceeded expectaions. By accepting this position, he was able to continue supporting the medical deployment needs of two subordinate Engineer Battalions without interuption. He also provided leadership and mentorship for two battalions' 68Ws to improve their skills, readiness and ability to effectively care for their fighting forces in preparation for deployment to OIF and OEF.

MSG Auble demonstrated initiative and integrity by launching a brigade Motorcycle Mentorship program and coached its growth until all members were involved. Since the implementation of this program, there have been no motorcycle fatalities or significant injuries in the Engineer Brigade.

As one of the first members of the new 130th Eng Bde, he demonstrated initiative in creating all medical policies and procedures for the newly activated Engineer Brigade, ensuring he was prepared for any eventuality. He also created a brigade Standard Operating Procedure for the new Consolidated Brigade Aid Station, which enhanced the care of more than 2,000 Soldiers.

o volunteers for tasks on a daily basis

o worked as Range Safety for more than 50 small arms ranges, supervising more than 700 firers with no safety incidents

SFC Rivers demonstrated excellence in a critical leadership role as Platoon Sergeant and Triad Team Member by promoting team momentum, enthusiasm, pride and successful outcomes for our WTs. SFC Rivers is highly focused and adept at multi-tasking as he successfully prioritizes when confronted with with multiple deadlines, conflicts, demands and an increased caseload. SFC Rivers displays a level of involvement as Community Based Warrior Transition Unit Triad Member that reflects high professional standards and a strong commitment to our nation's heroes.