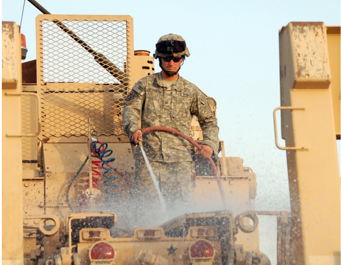 o made a comprehensive effort to educate leaders and Soldiers about equal opportunity, sexual harassment and sexual assault during all facets of training

o lives by the Be, Know, Do mentality, demonstrating while teaching how to be proficient in all MOS specific tasks

o mentored new Soldiers until they established themselves in the work center; forged an integrated climate of morale, productivity and readiness

o fostered a climate of dignity and respect by adhering to SHARP programs; ensured the fair and respectful treatment of assigned personnel

o listened to the concerns of all Soldiers and incorporated their ideas for improvement; built a team that shared success

o invested enormous amount of effort and time to establish relationships with Soldier; met with soldiers IOT establish or follow-up on career and personal goals; dramatic improvement in morale

o recorded all challenges faced during in-processing and developed comprehensive OI for newcomers; streamlined their integration and eliminated obstacles to new Soldiers' attempts to succeed

o anticipated required actions and took the initiative to complete them; reduced operational delays to zero and eliminated follow-up corrections

o created a work climate centered around dignity and respect for Soldiers and Civilians which resulted in zero SHARP, EO and EEO related incidents

o dedicated to the values and traditions of the Army

o innovative and determined in pursuit of goals of the Army

o the epitome of what every NCO should be; aggressive, intelligent and professional

o selflessly placed the Army and subordinates above himself to meet the needs of the mission through professionalism, mission accomplishment and dedication to duty

o looked upon by superiors, peers and subordinates as a model Soldier and extraordinary leader

o totally dedicated to the Army, the unit's mission and Soldiers; a credit to the NCO corps

o never failed to extend his assistance to other units; puts the welfare of troops above his own personal needs

o exhibited pride in the unit; believes in team building and force multiplication

o her performance has been exemplary throughout this rating period

o competent in all her duties and responsible

o unquestionable loyalty to the unit, subordinates, peers and Chain of Command

o takes initiative by taking action quickly and with authority

o unfailing loyalty to the chain of command, its goals, and Soldiers

o synchronized the consistent delivery of over 25,000 lines of medical supplies valued in excess of million

o hard working; dedicated NCO, demonstrates by his actions to subordinates, the meaning of integrity

o not afraid to confront sensitive issues; understands the excitement of truth

o displayed the utmost devotion to the mission and the soldiers

o remained flexible and cooperative under any condition

o absolute dedication and loyalty to the chain of command, unit, and mission

o motivates and challenges subordinates through leadership by example

o executed all tasks with vigor and integrity

o absolutely dedicated to the mission and unit success

o risked life so that others may live on countless occasions

o continuously seeks out new and difficult challenges and responsibilities

o exhibits the skill, temperament, and reliability of a true professional

o possesses absolute dedication and loyalty to the unit, the mission, and the soldiers

o maintains a fierce and steadfast belief in assigned mission

o alienated Soldiers with integrity who pointed out inaccurate reports and claims; discouraged honesty and jeopardized the mission

o as Det Chief, forced his captive audience to listen to his personal political views on a daily basis; wasted time and resources and lowered morale and productivity

o is a motivated troop but needs further guidance in...

o has unlimited potential but requires more experience before...

o must realize the importance of finishing assigned tasks without supervision

o failed to keep track of the Soldiers under his supervision

o sometimes requires supervision on how to talk to Soldiers

o encouraged soldiers to advance by cheating for each other, poor example