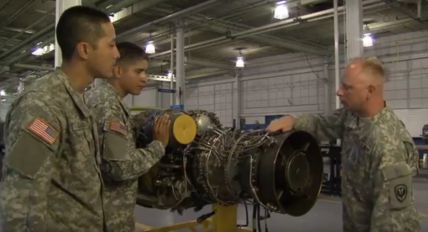 o served as a range coach and safety for the BN M4 range; coached Soldiers on the fundamentals of marksmanship, leading to a high qualification rate

o sponsored Soldier to represent USANEC-A in BN Soldier of the Quarter board; Soldier outperformed all others at the formal board

o modified NSN repair parts to work on TPE Gators and Polaris when civilian parts were unavailable; prevented conditions from limiting the mission

o chosen over three SFCs to assume the role as First Sergeant in his absence; achieved great results

o identified lack of shielding as cause of intermittent failure; corrected chronic problem and saved thousands in repair parts and time

o maximized the use of automation to reduce workload and delays; new procedures adapted by the entire unit for admin processing

o expert SARSS technician; identified and solved system and software errors that would have impaired SSA operations and mission execution

o synchronized a myriad of admin, logistics and training requirements to provide predictability and precise planning through a dynamic and enforced battle rhythm

o assisted in the designing and planning of the expansion of FOB Salerno theater FARP and AHA; improved aircraft versatility and ammuntion storage capacity by 20%

o unparalleled ability to multitask and achieve outstanding results; reduced maintenance work order back log by 50% in less than 3 months

o technical knowledge, skill, and demonstrated expertise in IT and Cyber tasks resulted in his selection to attend the Cyber Digital Master Gunner course

o experience has led to expertise in his job

o set the standard within the Brigade for Range certification

o made decisions based upon his and his personnel's experience; always made the right choices for the team as a whole

o always in focus and is superbly well organized; never without direction

o relentlessly pursued professional and personal development; graduated college with honors earning an associates degree with a GPA of 3.49

o commended for her outstanding performance and dedication to the civilians and Soldiers affected by the Ft. Hood tragedy

o AAR skills are among the best

o demonstrated high levels of competence; personally selected by the company 1SG to lead in his absence

o did not waiver from responsibility for himself; learned from his mistakes and sought self-improvement

o completed 18 semester hours of college towards a associate degree maintaining a 3.8 grade point average despite a demanding work schedule during his rating period

o completes all tasks in a timely manner and beyond expectations

o processed over 45 elimination packets with a zero errors

o critical and independent thinker, possesses the confidence and mental toughness to strive for excellence

o reviewed, identified, and corrected 162 signature cards (DA 1687s) for the entire Group; resulting in an increased accuracy rating of 75% to 97%

o demonstrated proficiency in controlling rotary-wing assets while under fire repeatedly, his actions were instrumental in deterring further enemy attacks on his unit

o demonstrated outstanding ability to keep up the fast pace, high demands as Medical Training NCOIC for deploying medics while battling PTSD, placed over 1200 medics in schools with no errors in 2011

o selected to be the platoon sergeant for a total of 4 weeks during the rated period; superbly handled the additional responsibilities

o ensured the team was prepared for all missions and contingencies prior to movement; ensured mission success

o proficient in all technical areas

o always strives for self improvement

o effectively executed all missions and goals assigned regardless of difficulty

o selected by the Staff Judge Advocate and Command Paralegal as the command's Coggins Award nominee, an award for excellence for paralegals

o technically and tactically proficient Master Gunner; supervised over 200 ranges and qualifications across the brigade

o his tactical proficiency was continually sought after by subordinates and superiors; persistently incorporated his former combat experiences to improve unit operations

o made Dean's List with distinction for 4.0 grade average in Bachelor degree program

o continually demonstrates competence and knowledge of a 1SG

o failed to prioritize workload and use effective time management; showed little motivation to adapt to the work environment

o refused to seek out new experience and professional growth; failed to develop his tactical and technical knowledge to improve his responsibilities